Alyson Rae Stoner (born August 11, 1993)[1] is an American teen actress, dancer, singer and model. Stoner is best known for her roles in The Suite Life of Zack & Cody (as Max), Cheaper By The Dozen, Cheaper by the Dozen 2 (as Sarah Baker), Mike&#039;s Super Short Show (as Sally), Step Up (as Camille Gage), Alice Upside Down (as Alice) and Camp Rock (as Caitlyn Gellar). She has been a background dancer for several stars, such as Missy Elliott, Eminem, Outkast and Will Smith. She is also known for her voice as Isabella in the Disney Channel series Phineas and Ferb, and The Alyson Stoner Project, which was released on DVD in February 2009.

While growing up in Toledo, Ohio, Alyson attended Maumee Valley Country Day School and studied Ballet, Tap Dance, and Jazz Dance at the O&#039;Connell&#039;s Dance Studio. She also modeled and trained at the Margaret O&#039;Brien Modeling Studio. She won Best Model of the Year at the IMTA Convention in New York City with Ms. O&#039;Brien&#039;s studio in 2000, and she won many awards in acting and dance. After this, Alyson decided to try hip-hop dancing, appearing in the Missy Elliot music video for Gossip Folks.
[edit] Career

After choreography training in Los Angeles, Stoner famously appeared as a background dancer in the music video for Missy Elliott&#039;s "Work It", "Gossip Folks", and "I&#039;m Really Hot",and a background dancer in the music video for Lil&#039; Bow Wow&#039;s "Take ya Home" and as well as Eminem&#039;s "Just Lose It" alongside a one male and "No Tengo Dinero" by the Kumbia Kings. She has also been a back-up dancer for Will Smith at the 2005 Nickelodeon Kids Choice Awards, and for OutKast at the 2004 Kid&#039;s Choice Awards. Stoner danced with a dancing group called the JammXKids between 2003 and 2006. She quit the group in early 2006 due to scheduling conflicts, but continues to work with the individual kids in different jobs. She was also one of the dancers in the special features for the Shark Tale DVD. Stoner teaches hip hop currently at millennium dance complex, and is credited as the youngest person to teach a master class there.

In 2002, Stoner became the co-host of the Disney Channel Mike&#039;s Super Short Show along with Michael Alan Johnson, an infomercial segment regarding forthcoming Disney releases.

In 2003 and 2005, she appeared as Sarah, one of the twelve Baker children, in the successful comedies Cheaper by the Dozen and Cheaper by the Dozen 2. She has also appeared in several television shows aimed at the preteen market, including The Suite Life of Zack and Cody, That&#039;s So Raven and Drake & Josh.

In 2006, she had a small film role in Step Up as Channing Tatum&#039;s younger sister, Camille. She currently provides the voice of Isabella in the Disney Channel animated series Phineas and Ferb, it was Stoner that came up with her character&#039;s catchphrase "Whatcha doin&#039;?"

In 2008, she starred in the Disney Channel Original movie Camp Rock as Caitlyn Gellar, an aspiring music producer. Her reception in Camp Rock was particularly strong, with various media outlets suggesting it was about time she played a main character role, having backed up for other big names such as Will Smith and Hannah Montana.[2]

Recently, Stoner starred as Alice McKinley in the movie Alice Upside Down, based loosely on the Alice series, particularly The Agony of Alice, by Phyllis Reynolds Naylor. This was her second starring role, and, according to an interview that appears on the direct-to-DVD release, she states that this was the first time she has had to appear in every scene in a movie.

Stoner has recently finished filming the third Step Up film; Step-Up 3-D, the first dance movie to be shown in 3D. Alyson herself confimed Adam Sevani will star. Stoner will reprise the role of Camille Gage, Tylers younger sister. Stoner has recently uploaded a video onto her official youtube page of her final dance rehearsal, which introduces other/potential cast members. It will be released at the cinemas in 2010.[3]

In 2005, she sang two songs from the soundtrack of the movie "Alice Upside Down" Lost and Found, and Free Spirit, in which she plays the lead role. She has also recorded a cover version of the song Dancing in the Moonlight for the 2009 Disney DVD/Blu-Ray movie, Space Buddies.[4]

Stoner is currently working with record producers, songwriters and a vocal coach in order to focus on transitioning her style of voice, from "kiddie-pop" into a more soulful pop vibe with a little alternative edge, so she can start working on her first studio album.

Stoner is the "dance editor" for KEWL Magazine. She also recently hosted a global fan summit on Amazon.com with Hannah Montana star Miley Cyrus. Stoner appeared in the Disney Channel Original Movie Camp Rock, along with the Jonas Brothers. She stars in a webseries called Ghost Town shown on Dailymotion&#039;s newly launched DM Kids site.[6] In February 2009, Stoner released the Alyson Stoner Project described as "a dance video hybrid - melding many styles of entertainment into one package".[7] It was directed by Kevin Schmidt, her co-star from Cheaper by the Dozen (2003 film).[7] Behind the scenes videos and pictures are available at her YouTube[8] and MySpace accounts.[9]

In the summer of 2008, she appeared in the Disney Channel Games as a member of the Blue Lightning Team along with the Kiely Williams, Demi Lovato, Roshon Fegan, her Camp Rock castmates, Shin Koyamada, Cole Sprouse and several overseas Disney Channel actors. Stoner has also appeared in Wii Fit related videos on the Nintendo Channel on the Wii video game console demonstrating how to do balance exercises. She voiced the character Kairi for the video game Kingdom Hearts Re:Chain of Memories, and Xion in Kingdom Hearts 358/2 Days.
3 comments... 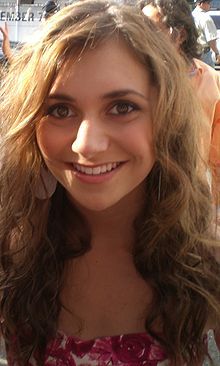